Neuro-typical children focus on a person’s eye while autistic children look at the mouth, study finds

Researchers at the University of Waterloo say they have developed a new, “kid-friendly” way of diagnosing autism in young children.
It uses infrared technology to read the way a child’s eyes move as they process the features of a person’s face.
“A neuro-typical child will spend a whole lot more time looking at the person’s — or the face’s — eye,” Anita Layton, a professor of applied mathematics, pharmacy and biology, told CBC Kitchener-Waterloo. “A [child with autism] will look at the mouth a lot more.” 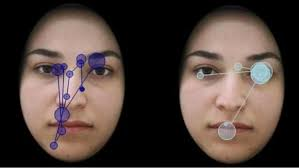 The software used maps out how the child’s eye travels over the different features of a person’s face. The longer the child fixated on a particular feature, the larger the circle. (Submitted by: Anita Layton)

Layton and her team developed the technique by showing a group of 40 children 44 photographs on a screen connected to their eye-tracking device.
The children were all around 5 years old. Seventeen had been previously diagnosed as on the spectrum, the other 23 were considered neuro-typical.

The difference in eye tracking has been well documented, Layton said. Her team found a way to turn that difference into a diagnostic tool that works well for young children and even non-verbal kids on the more complicated end of the spectrum.

Right now, the two most popular ways of diagnosing Autism Spectrum Disorder are by having the child or parent fill out a comprehensive questionnaire, or have the child evaluated by a psychologist.

Questionnaires, psychologist diagnosis
“It’s not easy for a child. Imagine a four or five-year-old child, neuro-typical or [autistic] to sit there for a long time, to answer your questions. That simply is no fun for a kid,” Layton said.
The eye-tracking test, on the other hand, can be done in just a few minutes.
Autism signs could be present as early as 2 months

Early diagnosis of Autism Spectrum Disorder means a child can get early access to behavioural interventions and treatments like speech therapy, the researchers said. Getting treatment early gives kids on the spectrum a better chance to develop important life skills and live independently.
Layton said she hopes in the time, the technique could also be used to diagnose anxiety, depression and even dementia.